From A/B testing to contextual bandits 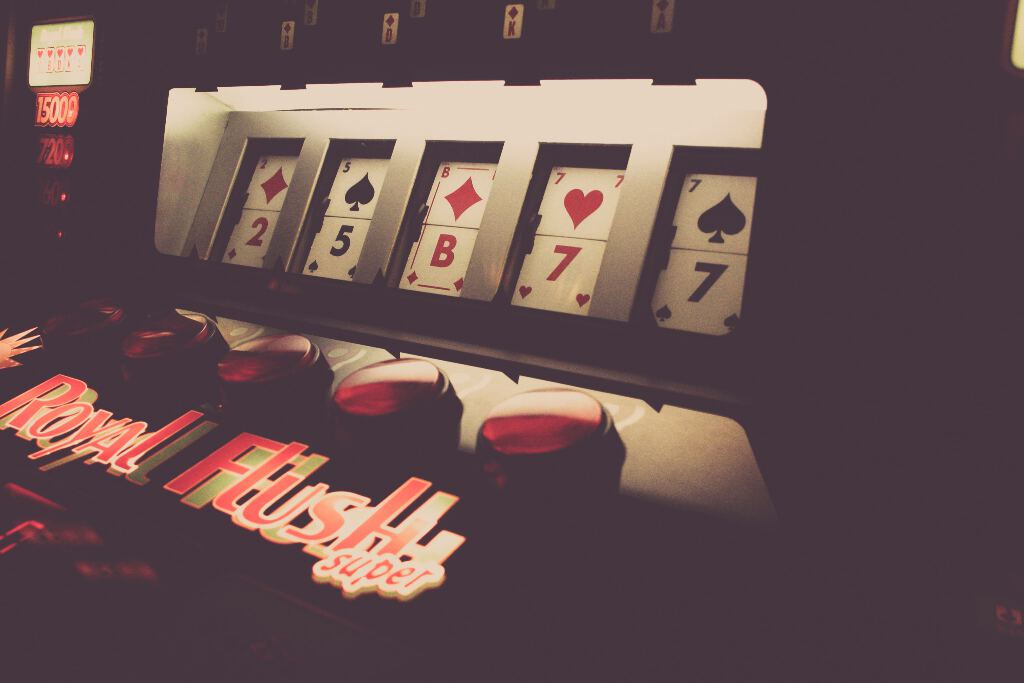 Many companies are familiar with A/B testing, where design decisions are validated through large scale online experimentation. Fewer companies, however, are familar with approaches to automate these experiments, or handle heterogenous treatment effects (i.e. different users respond differently to different interventions).

A set of apporaches, known as multi-armed bandits, offer a way to efficiently converge on the optimum variant without having to wait for the ‘final answer’ as in A/B testing. Furthermore, a special type of multi-armed bandit, called a contextual bandit, can find the right variant for each individual user. These algorithms can adapt and learn from the environment automatically, without human intervention.

Here, we compare A/B testing, multi-armed bandit, and contextual bandit approaches based on simulations of a synthetic population. To do this, we will use the contextual R package, which provides simple-to-use tools to simulate bandit algorithms.

First, we load these packages:

We also define some functions we will use later on:

Suppose there are 2 variants (A and B) of a website feature we can show to users. Once we show a variant to a user, they either convert, or they don’t (i.e. there is a binary reward). Our task is to show a variant to each user, such that we maximise the cumulative reward over the entire user population. The process of showing variants to users and watching how they respond will help us determine which variant to show.

We assume that there are 400 users in our population. We also assume that there are two types of users (e.g. male and female), who respond differently to our variants. We will call these Type 1 and Type 2 users, and we assume that the population is evenly split across these two types. Type 1 users have the following conversion probabilties for variants A and B: 0.6, 0.5. Type 2 users, on the other hand, have conversion probabilties of 0.4, 0.7 for variants A and B.

This code generates the user population:

This table shows the population breakdown over context (i.e. whether the user is Type 1 or Type 2) and counterfactual responses.

This plot shows the distributions of counterfactual responses for each context. 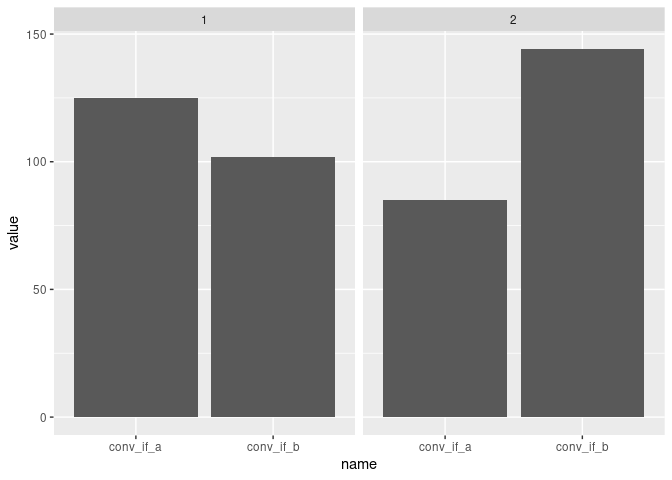 This synthetic user population forms our input to the bandit simulation demo. Note that this population can be swapped out and replaced with any population consisting of different contexts and counterfactuals.

This is the code to set up the bandit parameters.

Our bandit simulation will run 210^{4} bootstrap simulations in parallel for each of the following approaches:

Now that we have all we need to run the simulator, we run it with this command: 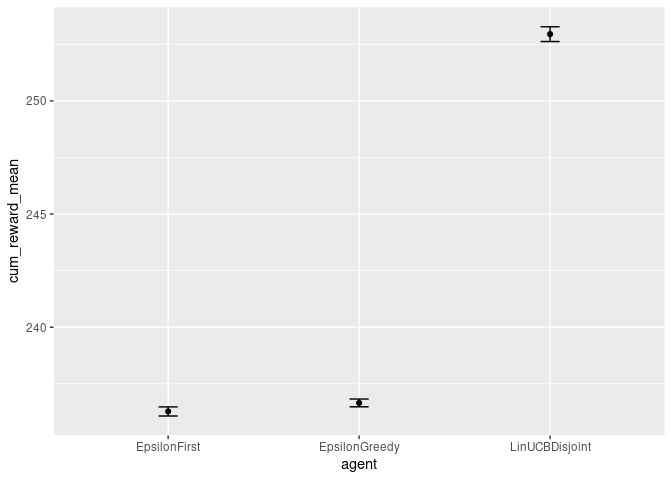 This plot shows that the contextual bandit outperforms both the A/B testing and multi-armed bandit approaches. This is due to the fact that the user preference for variant A or B depends on the context (i.e. whether they are Type 1 or Type 2). The contextual bandit is able to use this information to make better decisions, whereas the A/B testing and multi-armed bandit approaches are blind to this.

We can also plot the average reward for each approach over time: 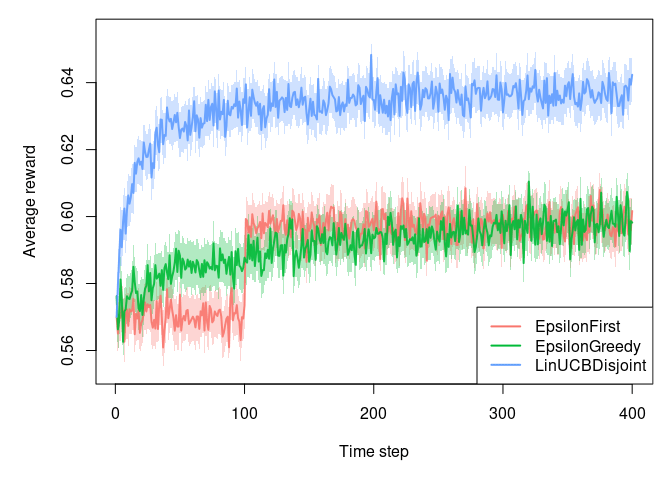 For A/B testing (EpsilonFirst), we see a distinct step change at 100. This is where the winning variant is decided and then chosen exclusively for the remainder of the run. The multi-armed bandit (EpsilonGreedy) overtakes the A/B testing approach earlier on, which highlights the ability of the multi-armed bandit to converge to the wining variant more quickly, without having to wait for the ‘final answer’ as in A/B testing. The contextual bandit (LinUCBDisjoint) outperforms both of the other approaches, due to its ability to detect the two types of users in this population, and their differing response probabilities with respect to the variants.

We have shown how a contextual bandit can outperform A/B testing and multi-armed bandit approaches for this simulated user population. Note that the assumptions that we have made about the different user types this population are not particularly extreme - it’s common to see real populations with more complex heterogeneous effects. This ability of contextual bandits to handle these different user behaviours makes them well-suited to real world applications. Furthermore, both the multi-armed bandit and the contextual bandit approaches are able to achieve more conversions over fewer users, making them well-suited to situations where experiments need to be run efficiently.